Censorship is a testament to the power of words, and it has a nasty habit of backfiring and creating martyrs. The roll call is impressive... Alexander Solzhenitsyn, Ken Sara Wiwa, Nawal El Sadawi, James Baldwin, Breyton Breytenbach - The names of the writers are usually more recognizable than those of the rulers who tried to silence them.

I as a person oppose censorship based on the sole opinions and/or convictions of any one person or group. I believe that it is the viewer's discretion to censor what they see, or in the case of children, the parents'.
An example, something which drove me to create this petition, is Thomas, the creator of Elfwood. When he made his now popular and world-wide art site, he set in place censorship rules that are based on his Swedish upbringing, not taking into account the fact that there might be other cultures signing up. When one of my works was not accepted due to censure, I stopped uploading. At least DeviantArt allows you to mark if a work is "adult material". While this is not a petition against Thomas or Elfwood in general, the image was not even... Well, here, I'll let you make your own thoughts on the matter... 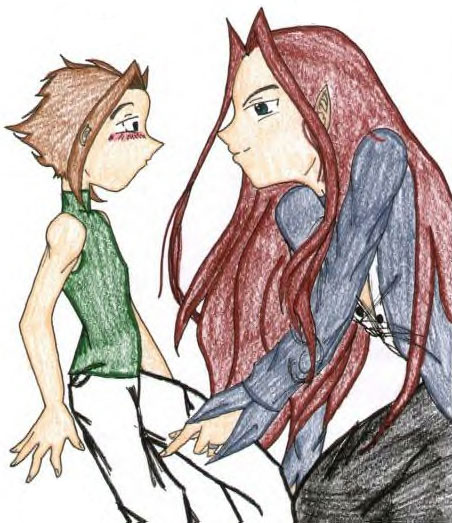 Another example is when a poem I wrote was not allowed to be published in my college's Writers' Corner. I asked why, and the editor replied that she didn't like it because it was too dark, had cursing, and dealt with suicide as its main theme.

Censorship like this is wrong! It interferes with the rights of free speech and press, per the United States Constitution, yes, but these rights SHOULD be a part of every human's existence. If you agree with my view, sign the petition below. Help censor censorship!!

Shore: "When President Kennedy was shot, when Martin Luther King delivered "I Have A Dream," when we walked on the moon, our lives were shaped by these events, in part because of the news. But on all the other days, they're businesses, looking to compete like anybody else in a competitive market place. They sell product. And even if you're determined to believe that this particular network is some evil empire, looking to spread right-wing propaganda... that still doesn't change the fact that we are in this room today because a principal is shutting down the expression of ideas... simply because he disagrees with the content. If anything needs a champion today, it's the First Amendment. In a recent poll, half of today's high school students thought newspapers should get government approval of stories before publishing them. The First Amendment has become an endangered species. And here we have a high school principal practicing censorship. My, my. We do have a problem."
<URL:stuff/BL%3Afull_script.txt>

UPDATE!! www.rotten.com's Fuck of the Month, as well as yahoo chat's x-rated rooms were both pulled because of this: http://fotm.rotten.com/fotm/

2005-01-25 [bluesoulsearcher]: do you guys support the right of religious groups to quote religious passages disagreeing with homosexuality?

2005-01-25 [NightHawk]: No. Personally, I don't like religious groups telling people to hate other people in the first place. But that's just my opinion.

2005-01-25 [bluesoulsearcher]: but your opinion is that religious groups should not have that right?

2005-01-25 [Hependipherous]: You can't claim tollerance and want to restrict religious freedoms like that. It's just hipocritical.

2005-01-26 [NightHawk]: Hependipherous put it better than I. It's like that quote, how's it go? "While I may disagree with what you say, I shall defend to the death thy right to say it." Or something like that. However, it is my opinion that when religious groups say stuff like that OUTSIDE a church setting, THEN they cross a line. Like the crap I hear on the radio and see on TV every day. That's when I get out my jar of Whup-ass and start applying it liberally to every stuffy bastard I see ^^

2005-01-26 [bluesoulsearcher]: [Hependipherous] when you say attack, what do you mean? [NightHawk] So religious groups should be held to a different standard of free speech than other groups, like political parties, associations, etc?

2005-01-26 [Hependipherous]: I mean attack as in agressively berate them with accusations and threats of hell. Yep, they're threats. Jesus never did make any "fire and brimstone" speaches. He turned people by their own convictions, convinced them with their own hearts that they needed to change. You can't just yell at people, call them sinners, tell them they're going to burn, and expect them to thank you for showing them the light.

2005-01-26 [bluesoulsearcher]: how are they threats? Unless you believe the threats can be followed up on?

2005-01-26 [NightHawk]: No, they are being held to the same standards, but what peo le forget is that WE have not only the rights to speak, but also to not speak (which I wish some people would practice more...), the rig t to listen, AND, the key point here, the right NOT to listen. But I've seen many circumstances where that last bit is infringed upon.

2005-01-26 [NightHawk]: Furthermore, the leaders of Christianity (I wish not to overly offend anyone here at any rate) keep complaining that their message is being smothered, blahblah, when all I hear when I turn on the news is that Rev. {enter name here} recently denied 200 gay couples the right to marry... among other stories, like that one priest who stopped at nothing to ensure everyone knew that some gay guy who died in a some kind of not-so-good way was going to hell for being gay, etc

2005-01-26 [NightHawk]: But I think this is the wrong place to discuss these matters. We're here against censorship, not religious freedom, of which there is both plenty and not enough

2005-01-26 [bluesoulsearcher]: Very true, but the right not to listen is passive, and is only as enforceable as the willingness of the person not to listen. Otherwise we're backing the belief that Hollywood and video games were responsible for Columbine, not lack of parenting at home and discipline (of the kids bullying the perpetrators) at school; or that Howard Stern's radio show somehow influences children to bad behavior when those children get it from the adults in their lives. The right to not listen can never come at the cost of the right to speak.

2005-01-27 [Hependipherous]: The whole religious freedom thing plays into censorship when people decide that their religious documents are hate material and thusly must be banned. It's hard for there to be too much religious freedom... beyond things that break the law like animal/human sacrifice to name an obvious one.

2005-01-27 [NightHawk]: ... but I thought sacrifices and drunken, godless orgies were a GOOD thing... oh... right... LOL But in any case, my problem with the logic that the right not to listen is passive is completely out in left field. When some religious nut comes up to me and starts preaching to me that I'm gonna go to hell if I don't start chucking rocks at gays, I tell him to shut up. When he doesn't (and they never do), I take measures to ENSURE that he shuts up and remains that way. I'd hardly call that passive, and 'd never, ever call that censorship. The problem here is that then THEY are infringing upon MY right not to listen.

2005-01-27 [bluesoulsearcher]: well, once he refuses to shut up, he crosses the line from free speech into harassment and disturbance of the peace. But one cannot simply say the "religious nut" is forbidden to ever bring up in the first place. That's what I mean when I say passive. It's similiar to a worker and his company to not be liable for sexual harassment for telling an off color joke before being warned. And to take a note from the US Consitution (if we're going by US standards), he has the right of free assembly in public places. That's why the same ACLU that battled Ashcroft regularly also defended the right of Neo-Nazi to march through a Jewish neighborhood. As despicable as their agenda may be [cont.]

2005-01-27 [bluesoulsearcher]: one cannot simply pick and choose which messages they want to hear and by silence those they don't want to. It's kind of like censoring an image with mild sexual insinuation (see above) because one is afraid of offending others. [Hependipherous] is correct, however, that there can be too much religious freedom, as we see French priests fined for criticizing Islam (for fear of offending Islamic adherents), the attempts to install Sharia law in Ontario, Canada, and to pull a page from the past, burn people you believe to be witches