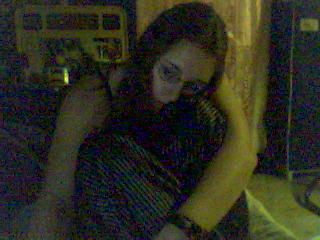 OH! And I rearranged my room completely and got rid of everything that seemed stupid and childish, I decided to keep what was practical, or what I couldn't get rid of. And next I'm cleaning my bathroom. I'm not doing this because Christmas is in two days, but rather because I know I've been a stupid immature brat and that I need to change.

If I have life so fucking grand...Why aren't I happy?

I’m just a teenager.
I’m not a child, without a care in the world.
I’m not an adult that thinks they have every worry under their control.
I freak at the smallest things.
Worry over nothing at all.
I cry for no reason.
I’m happy beyond ecstatic.
My emotions are worse than a roller coaster,
They make me sick with their swift changes.
I feel as though my life is always just out of grasp.
Movie, TV, they make life seem simple.
It is anything but.
It’s complicated beyond compare.
In movies, the intended are together in the end.
In life, you never know.
You miss opportunities for happiness,
You end up with a life full of misery.
Your life is not set out for you.
Destiny is something made up along with religion.
It’s because of people not being able to control it,
They make excuses, try to bend things to their wills.
I just want to make my mistakes,
Experience everything,
And find happiness in life.
If said happiness means having to break my heart, others hearts,
Lose important people, gain new ones,
Make life wreaking choices,
So be it.
I’m all for it.
I want to live.
The past is precisely that; the past.
Mourn, grieve, move on!
Sulk ‘til the end of your days, but always move on.

I do hope to one day find out what this ‘love’ is.
I’ve heard it’s one of the many greatest feelings.
I’m young, I only think I know what it is.
I know better than that.
I can’t know what I want.
When I finally do realize whom it is I love,
They will be far beyond my grasp.
Wasn’t it Murphy who came up with that one law?
The law that stated whatever bad could happen, would?
If not, then oops.
I guess I don’t know my dead guy quotes.
Oh well. It’s inevitable,
History is doomed to repeat itself, why learn about it?
So your brain can be filled with worthless crap about things you’ll eventually forget?
Sure, wonderful, fun!
The education system of today is downward spiraling.
No one wants to learn,
Those who do, are few, lost in the crowd.
I wish for days of proper,
Days of brilliance,
Days where people dreamed,
Not rot their minds.

Everything is my fault.
Blame me for all your problems.
I can’t do a thing about it.
I should wear a shirt,
One that says “I’m Stupid.”
Wear it constantly.
That is me.
Just ask my family.
To them, it’s always me.
I wish I could be nice.
I wish I could be beautiful.
I wish I could be skinny.
Hell, even semi-skinny would be nice.
I wish my stupid attitude didn’t get in my way.
I wish life didn’t suck.
I wish I wasn’t such a spoiled brat.
I wish my family weren’t psychotic,
That it wasn’t inevitable for me to inherit the ‘Braun Gene’ (now dubbed ‘Roth Gene’),
That it wasn’t inevitable for me to be fat.
I wish that the ‘love of my life’ realized I liked him.

Written during the month of August…

If you are my friend, then I demand that this be put on your house/page thingy! I demand</i>! OH, and have a wonderful day!!

Grrr!! I'm so pissed. I can't do anything when I'm here! I talk: "Steffanie, shut up! Your voice is annoying!" It's not my fault I was cursed with my mother's high pitched voice! I listen to my music: "Turn that shit down! Your Grandma is trying to sleep!" AT 3:34 in the afternoon!? Damn! I get on the internet: "Get off, I need the phone." "But I just got on." "I don't care get off." And you know what? They don't even use the phone then! I watch TV: "Move, My show's on." And you know what he watches? GOLF! The most boring thing on the face of the earth (sports wise) GRRR!! I'm just so fucking mad!!!! Adding to the fact that I had the most awesome week up until now.

And Hanna had to go and say "Steffie, when are you getting your puppy?" Big mistake! Grandpa got all pissed and said "She ain't getting no fucking dog. We had the last one and that's good enough!" I have my puppy picked out and everything! His name is Bon and he's three weeks old! So adorable!! And he told me I can't keep him! I've known the little guy since he was born! I can't bear to part with him! :(

I miss Curt. *crawls into a ball and cries* When he was home I could stay at my dad's house, which was where he was staying, and just have fun all the time. But now I'm back home, my mom's house, and not even two hours and I'm in tears! It's a super long story...But she said something that caused my mind to think the worst and we got into a fight and I just got so mad/scared that I just started crying. It's not fair! I want Curt back. Or even Chad! When he's home Mom yells at him...I just want one of my siblings!!! *sobs*

yes I do realize I sound pathetic here...But I only see Curt twice a year (if that) and Nici the same...Heather I haven't seen in three and Chad only recently came back...I feel so alone...

The logged in version
News about Elfpack
Help - How does Elfpack work?
Get $10 worth of Bitcoin/Ethereum for free (you have to buy cryptos for $100 to get it) and support Elfpack!