Subtle layers of hard rock make for a less exciting, but still compelling U.S. introduction to this Japanese band.
by Christian Nielson-Buckholdt

May 16, 2006 - There will be two kinds of people listening to Dir en grey's latest full-length album: those who have heard Deg before, and those who haven't. The former group will consist mostly of either committed fans, or people who for some reason can't escape out of earshot.

For the latter group of listeners, though, Withering to Death will be their cherry experience with the visual kei band. It's Deg's first U.S. release, and if neophytes have even the slightest idea of what Dir en grey sound like—though obtuse, the term "hard rock" is the safest descriptor—they'll likely not be too disappointed. Much like the previous four albums it comes in layers, though ever since their albums Macabre and Kisou, the layers have become increasingly subtle. On one hand this is a good thing, making for a less polarizing, more streamlined experience; on the other hand, toning down some of the daring elements that brought Deg to the forefront of their genre also makes Withering to Death a little less exciting. 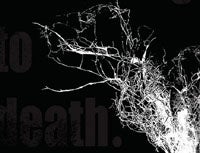 The album starts off with four songs that sound generally more alike than different, though making "-saku-" the second single was interesting. The album's first single, "THE FINAL," is alterna-radio-friendly, and there's a subtle elegance to it, not unlike "304 goushitsu, hakushi no sakura" (Gauze) or "Kasumi" (Vulgar). "-saku-," however, lacks a good deal of refinement, almost daring anyone to like it. The video for it even begins with someone listening on the radio to another song from the album—"Machiavellism"—that in fact may be the catchiest tune of them all, as if they were trying to say, "Yeah, we could have given you another easy song, but you know what? F--- off" (literally—those last two words are part of the chorus).

Which is not to say that "Machiavellism" should be dismissed. It's a hell of a lot of fun and just about the best gateway song on here, followed closely by "Jesus Christ R'n R." "dead tree" builds in two cycles of forlorn mellowness punctuated by short bursts of anger, and "GARBAGE" is vintage instrument-thrashing, esophagus-blistering rock. It also happens to be in English more than half the time, though you might not know from listening.

Translating a foreign language can be complicated, confusing, and potentially presumptuous. So perhaps the best advice for WtD is: a) get familiar with the themes and images by reading the liner notes (ignoring typos) and b) try to figure out how the hell to sing along to the parts that are in English, 'cause it ain't easy.

Even without being extreme or experimental, Dir en grey stand out, especially so against the largely cacophonous morass of American popular music. In coming stateside, Withering to Death needs to strike a delicate balance between satisfying established fans and winning new ones. It may not be much of a step forward for the band musically, but its success could prove to be one geographically.

IGN's Ratings for Withering To Death
out of 10
8.1 OVERALL

Back to Vulgarity: A Tribute to Dir en grey

Back to Dir en grey Articles/Reviews
News about Elfpack
Help - How does Elfpack work?
Elfpack!